Albert Agustí, President of Sport Cultura Barcelona, presented Andrés Iniesta with the award that he had collected in his name, Guillermo Amor, on October 17 at the Old Estrella Damm Factory. 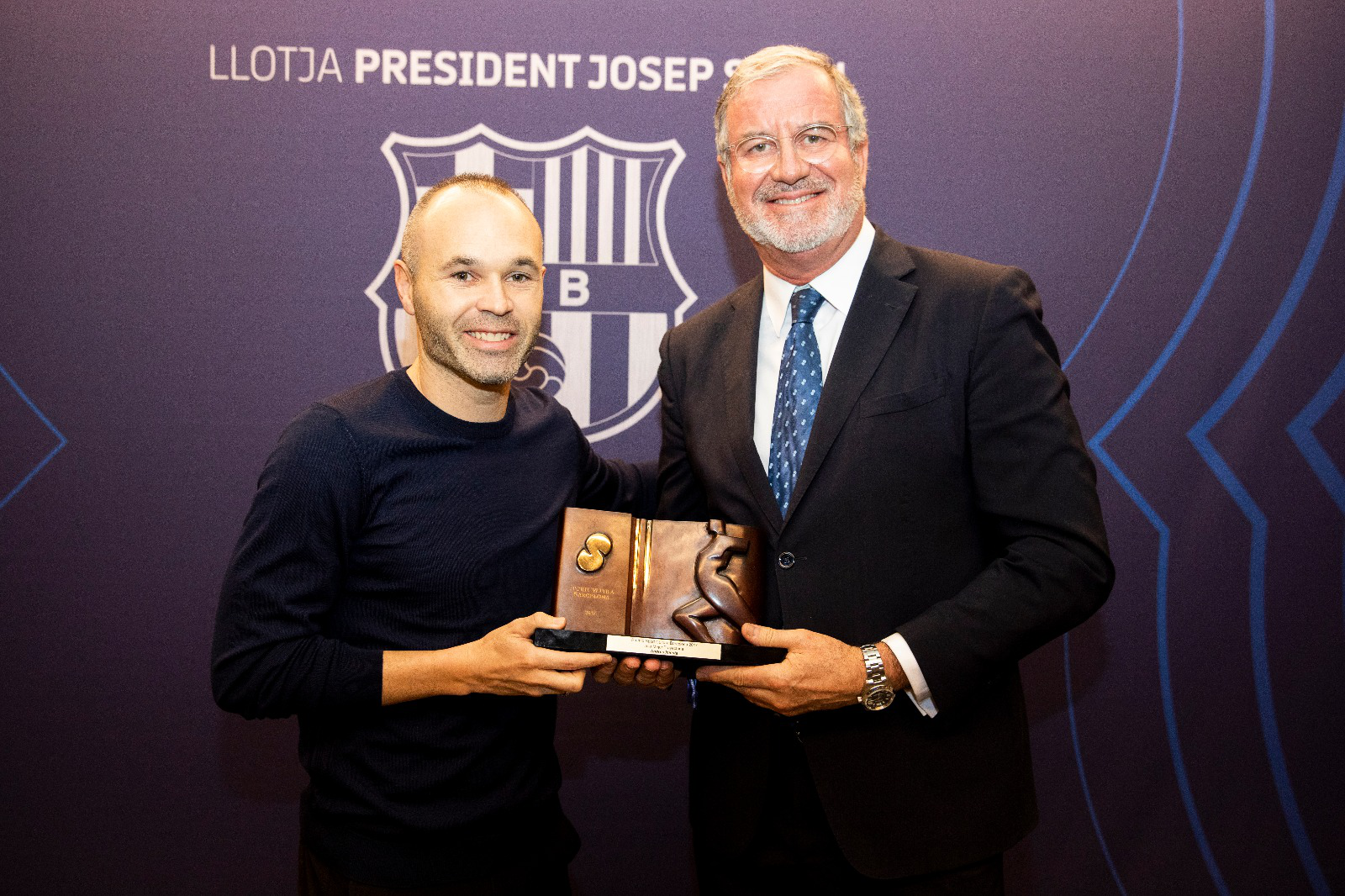 The event was attended by the president of Sport Cultura Barcelona, Albert Agustí and the honorary president of Sport Cultura Barcelona, Manuel Carreras Fisas, as well as various personalities from the cultural, sports and institutional world of the city such as Gerard Figueras, General Secretary of the Esport of the Generalitat de Catalunya; Maite Fandos, Deputy Delegate for Sports of the Diputació de Barcelona; Marta Carranza, Sports Commissioner of the Barcelona City Council; o Ramón Agenjo, patron director of the Fundació Damm.

Sport Cultura Barcelona Awards reward a person, group or institution that has been relevant in the field of Culture and Sports, as well as the one for Best Career in recognition of a person, group or entity for their professional career in any field. Furthemore there is also a Special Mention for a finalist person or entity that deserves it due to their work, journey or dedication, at the discretion of the Jury.

Jaume Plensa indicated that "whenever there is recognition of culture by civil society it is a reason for satisfaction". He also expressed that he was born in Barcelona and receiving this Award "is very emotional." Finally, he remarked that "introducing beauty in this city is an obligation of the artist."

Àlex Corretja, assisted on behalf of Garbiñe Muguruza, he said that “Garbiñe is very grateful and excited about the Award” and he commented that “all those who wonder when he will explode as a player must think that only with 25 years he has already won Wimbledon and Roland Garros, and to compare him with us at his age ”.

For her part, Guillermo Amor, representing Andrés Iniesta, stressed that the La Mancha player "is an example for what she has done on and off the field." Iniesta sent a video in which he said that "it is a reason of happiness to receive this Award because sport and culture are very important in people's lives."

Manel del Castillo, managing director of the Sant Joan de Déu Hospital in Barcelona, declared that "we are very excited about this Special Mention and very happy for who gives it to us" and recalled that "our mission has always been to attend to the most vulnerable people for 150 years ”.

The president of Sport Cultura Barcelona, Albert Agustí, remarked "there are 3 very distinguished Awards and for the first time we have a Special Mention to a very relevant entity in our city that does a great job". He also recalled that it was 32 years ago today since the designation of Barcelona as an Olympic city and pointed out that "now we have another dream: Barcelona-Pyrenees 2030. We must all work together to achieve it." 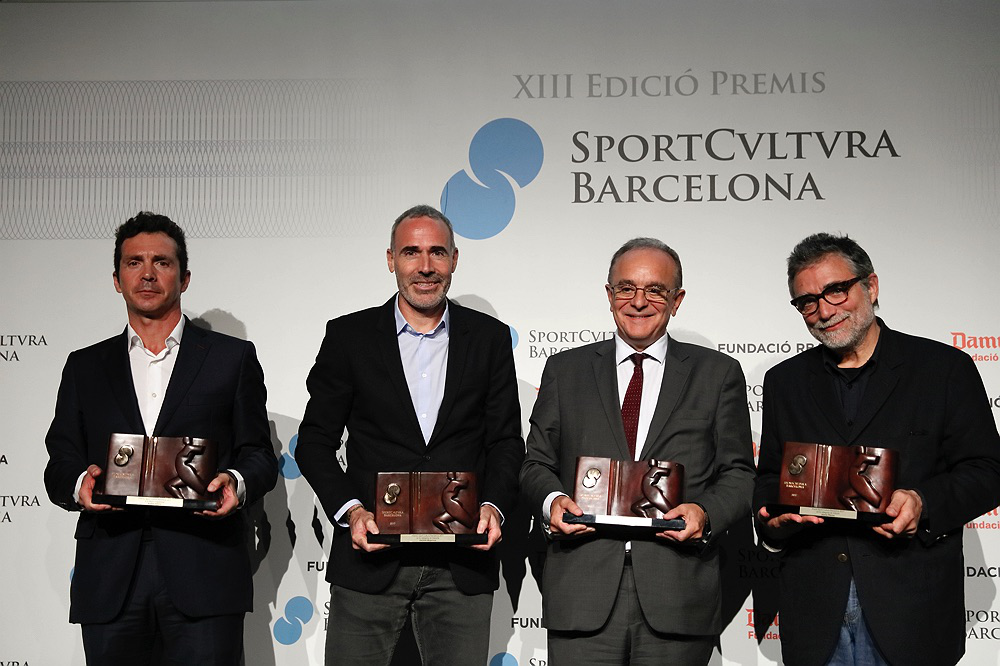 This last quarter of the year has entered as a new partner, Stratesys. Ramón Montané, president of the company, acts as a representative at Sport Cultura Barcelona.

Stratesys is a leading multinational in digital services, backed by 20 years of experience and one of the largest specialists in SAP and Opentext technologies. 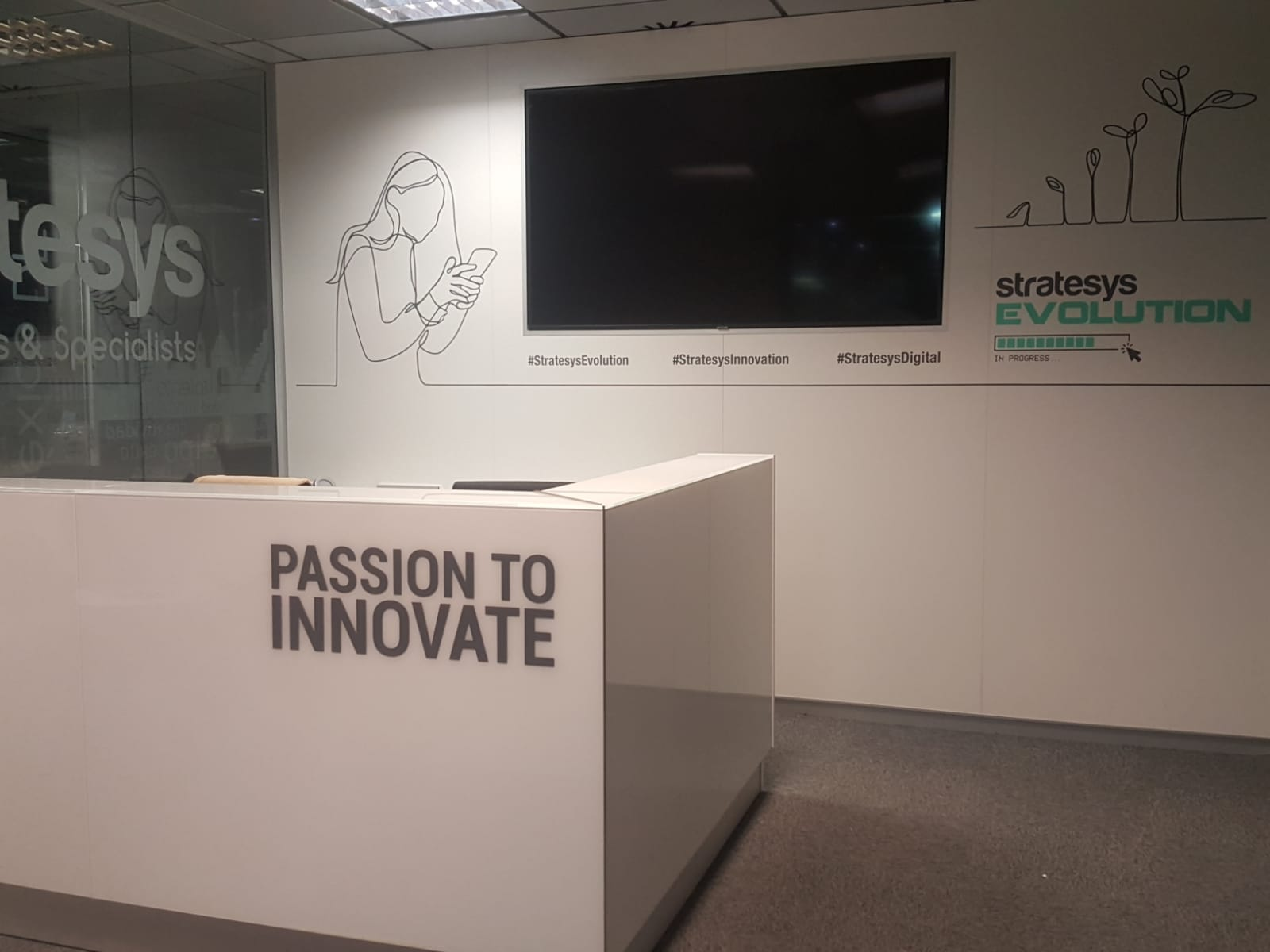 The Club Natació Atlètic Barceloneta, has become a permanent member of Sport Cultura Barcelona. Its president Julián García González is the representative of our Association.

Aquest Club will begin in 1992 with the union of the historic Club Natació Athlètic, founded in 1913, and the Club Natació Barceloneta, in 1929. It encourages the practice of sports and healthy habits. 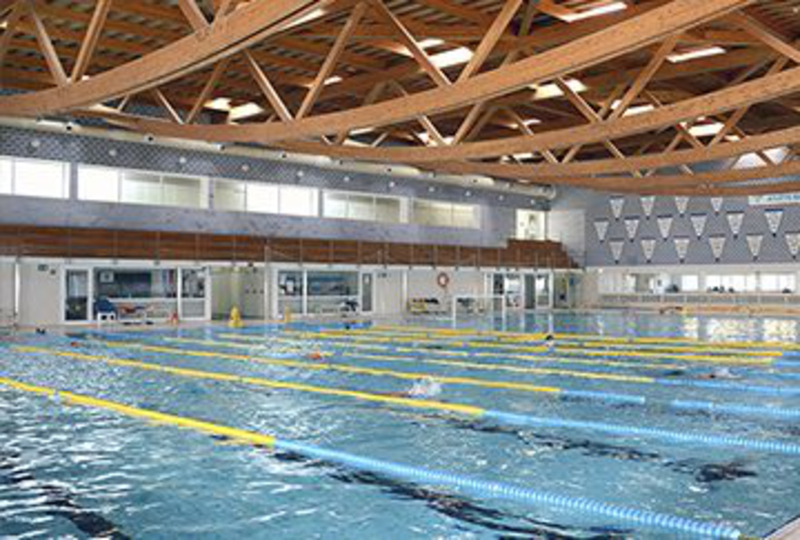 Solsona Comunicación, was founded in 1993 by Montse Solsona, it is specialized in communication, public relations, institutional relations, protocol, public affairs and digital marketing.

Alta Grupo de Comunicación is made up for Punta Alta, a specialist in the healthcare sector; La Bendita Agencia, a full service advertising agency; and The Digital Adgency, an expert in Digital Advertising and Communication services.

With this alliance they join synergies and optimize processes to offer a greater spectrum of services and activities, which will allow them to increase their business and positioning at the national level.

Mª Paz Corominas swam across the Strait of Gibraltar

On May 11th, Mª Paz Corominas, treasurer of Sport Cultura Barcelona, successfully managed to swim across the Strait of Gibraltar in record time, spending 4 hours 01 minutes.

She was the first Spanish athlete to qualify for an Olympic final, was in 1968 in Mexico and now she has become the first swimmer of more than 60 years to achieve this feat. 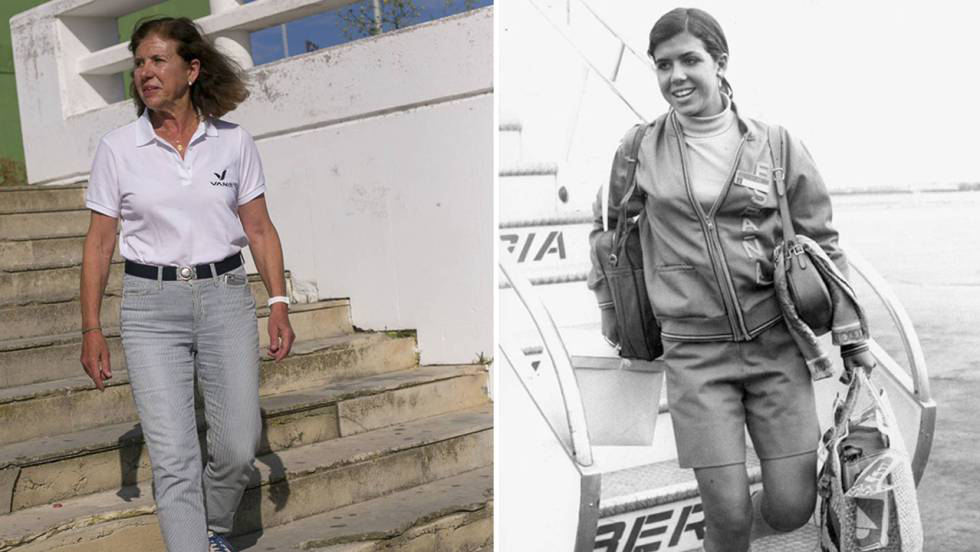 by crossing the Strait of Gibraltar

She will try the second week of May to celebrate her participation in Mexico 68, where she became the first woman to reach an Olympic final of the Spanish delegation, framed in a solidarity action.

The swimmer Maria Paz Corominas, 65, will try to cross the Strait of Gibraltar by swimming the second week of May. She will do it with three friends (her brother and two doctors of the same generation) with the aim of commemorating the 50th anniversary of her Olympic participation in the Mexico 68 Games, when the swimmer from C.N.. Sabadell became a pioneer. Mari Paz managed to qualify for the final of the 200 swimming backstroke, a milestone in a Spain that in those Games only took two female athletes: she, 16, and Pilar von Carsten, 21 and also a swimmer. Along with them, 122 men. "They treated me very well, I was the spoiled child," recalls now with nostalgia the first Spanish athlete to reach an Olympic final.

Maria Paz's adventure has the support of Marnaton and is also part of a solidarity action. The swimmer and her friends have created an initiative in the crowdfunding  http://www.migranodearena.org/">www.migranodearena.org, in order to "share solidarity with women, men and children fleeing poverty and wars in their countries in subhuman conditions." The initiative is called Give life to the sea and is supported by Pro Activa Open Arms. It is linked, of course, to water. “They are doing a great job rescuing people from the sea. Apart from saving lives, then they can train them as lifeguards, thus they go from being rescued to rescuers ”, he commented. 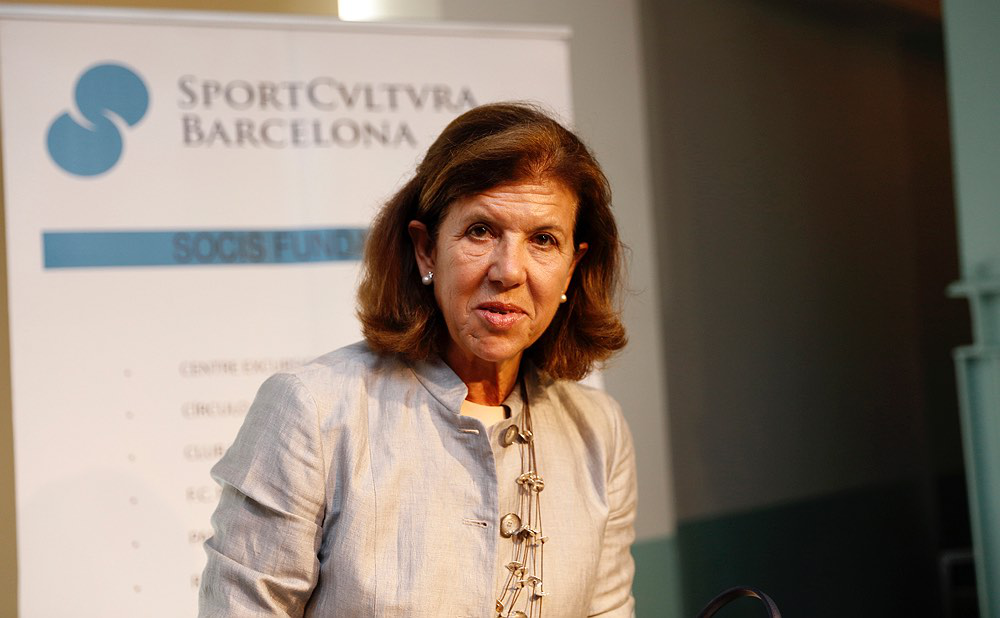 During a lunch that was held at the Sofia Hotel, the voting of the finalist candidates of the XIII edition of the Barcelona Sport Cultura Awards took place, in its three categories: Sport, Culture and Best Career.

The technical jury made up of thirteen professionals from the media and sixteen partners of our entity, chose the following winners:

This year the jury awarded a Special Mention to HOSPITAL SANT JOAN DE DÉU, which was a finalist in Best Career, for its 150 years since its foundation and the great work it carries out.

Last January, Selenta Group became part of Sport Cultura Barcelona. Jordi Mestre Masdeu, president of the Group, is the representative in our Association.

Since its foundation in 1976, they have pursued a single objective: to achieve the full satisfaction of their customers. The effort and constant search for excellence of the entire team has made possible the birth of Selenta Group.
The corporate brand that encompasses and represents the divisions of the chain that currently manages 9 hotels in different cities in Spain, as well as franchises of important international brands.
Selenta Group: Expo Hotel in Barcelona, Gran Hotel Torre Catalunya and SOFIA, in the Catalan capital; Don Carlos Leisure Resort & Spa, with The Oasis Wellness & Spa, in Marbella; Expo Hotel in Valencia, in the city of Turia; and Mare Nostrum Resort, in Tenerife, which includes the Sir Anthony boutique hotel. The group has more than 2,900 rooms, which last year occupied nearly 300,000 clients, 70% of them international. 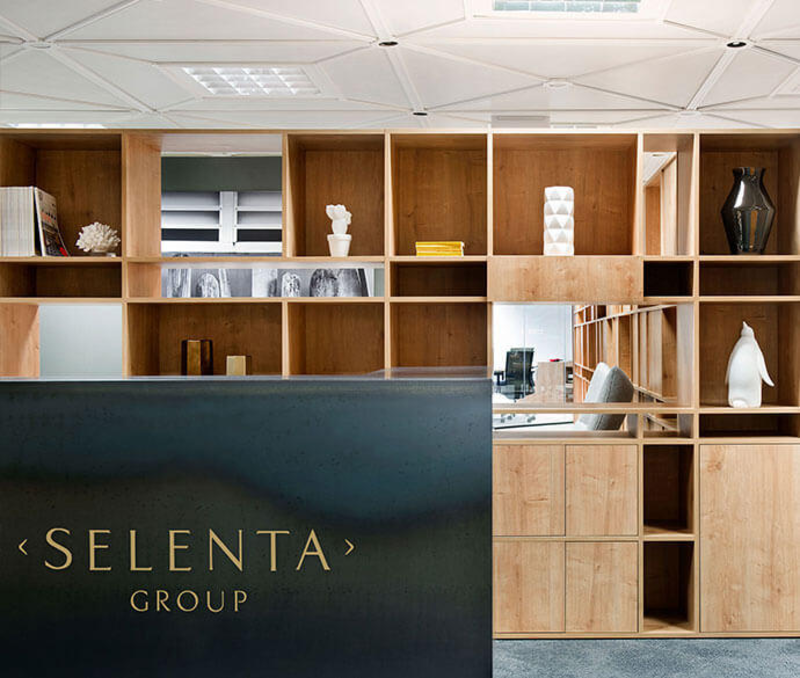 The people who read the gloss of the winners were:

Below you will find the three documents with the glosses. 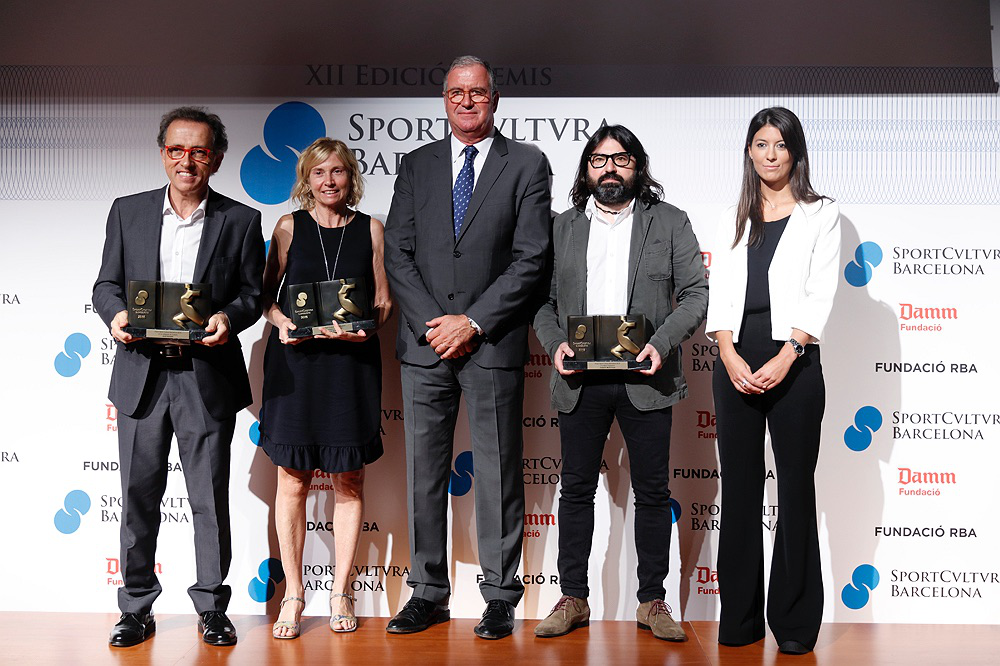